SHIATSU THERAPY – Promoting Health and Healing for More than 2000 Years 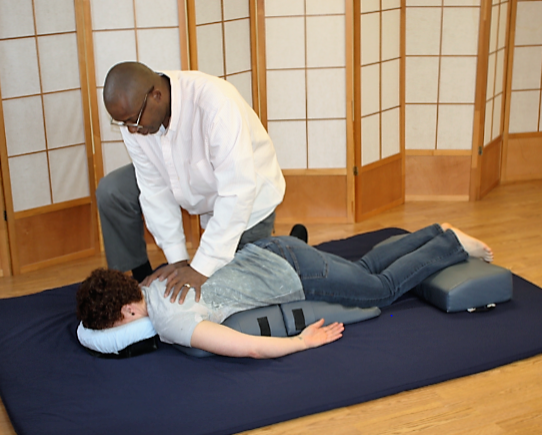 Shiatsu is a professional system of Japanese bodywork that has been used for thousands of years to promote health and longevity.  Shiatsu’s origins can be traced to China around 530 BC when Bodhidharma introduced a system of pressure point, self massage exercises for health called Tao-Yinn (Do-in in Japanese).  By the tenth century AD, Chinese Medicine had been introduced into Japan.  With it came Anma, which incorporates Vibrational Palm Healing, Spot Pressure and Massage, which loosely resembles present day Shiatsu.

In the late 1700s, doctors in Japan were still required to study Anma as a means of familiarizing themselves with the human structure, energy channels and pressure points so that they could accurately diagnose and treat patients using a variety of methods, including acupuncture, herbs and massage.  But by the twentieth century, Anma had become limited in use and became licensed only to promote pleasure and comfort or to address muscular tensions. Many Anma therapists continued to practice the art however, basing their work on the original principles of Anma and coining their work as Shiatsu, which literally means “cure with the touch of fingers”.

Through the work of two of its greatest proponents, Tokujiro Namikoshi and Shizuto Masunaga,  Shiatsu became officially recognized by the Japanese government in the mid 1950s.  Namikoshi established two schools of training, the Shiatsu Institute of Therapy in 1925 and the Japan Shiatsu School in 1940.  He aligned his work with both Chinese and western medicine. Masunaga taught at the Shiatsu Institute of Therapy for 10 years before opening the Iokai Shiatsu Center in Tokyo.  His expression of Shiatsu integrated Traditional Chinese Medicine, the framework of Anma, western physiology and psychology.

Presently, a Shiatsu Therapist may be seen as a cross between an Acupuncturist, without the use of needles, and a Chiropractor, without the high velocity adjustments.  Shiatsu primarily uses thumb pressure but also employs the use of the hands, elbows, knees and feet.  Shiatsu techniques involve holding, rocking, and stretching combined with various gentle manipulation movements.

From another vantage point, a Shiatsu Therapist may be seen as a body electrician.  Your home has wires emanating from the electric panel to every room.  Similarly, your body has invisible wires associated with every organ and extending to each nook and cranny of your body.  When you have pain, discomfort or feel emotionally “out of sorts”, a Shiatsu Therapist can restore your electricity (energy or Ki) by “resetting the breakers” in your body.  Pain, illness and disease are considered imbalances of Ki.  Health is restored when the pathways (meridians) that energy (Ki) travels along are balanced.

Shiatsu relieves a variety of health conditions including back, hip, knee and joint pain, sciatica and leg pain, neck and shoulder problems, stress, insomnia, digestive concerns, PMS and fatigue.   Treatment has a regulatory influence on the autonomic nervous system, thereby improving organ function and reducing muscle tension.  Treatment also stimulates, relaxes, invigorates, decongests, and gives an overall sense of body-mind-spirit well-being.  Shiatsu not only addresses the visible symptoms of imbalance, but also addresses the energetic level, the root of all imbalances or dis-eases.

Traditionally, Shiatsu is administered on the floor using a futon mattress.  Clients wear loose fitted clothing and clean socks.  Treatments last approximately one hour and usually cost between $60 and $80.  There are various types of Shiatsu: Acupressure Shiatsu, Five Element Shiatsu, Macrobiotic Shiatsu, Nippon Style Shiatsu (Namakoshi), Zen Shiatsu (Masunaga) and Ohashiatsu.  Practitioners have varying levels of competency and focus.  For instance, a Licensed Massage Therapist who generally has 20 hours of Shiatsu training can provide an introductory service.  If you want a more specialized treatment, seek the services of a Certified Practitioner, having 500+ hours of Shiatsu training.  Be sure to tell the practitioner what your concerns are and ask if they have experience and training to address them.  Shiatsu can be an invigorating and healthy solution to bring balance to your busy life and overall health.